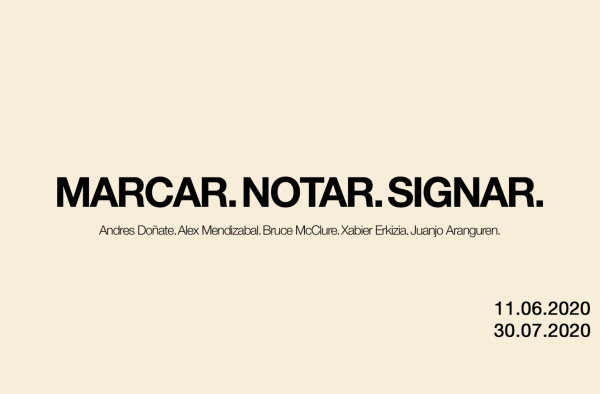 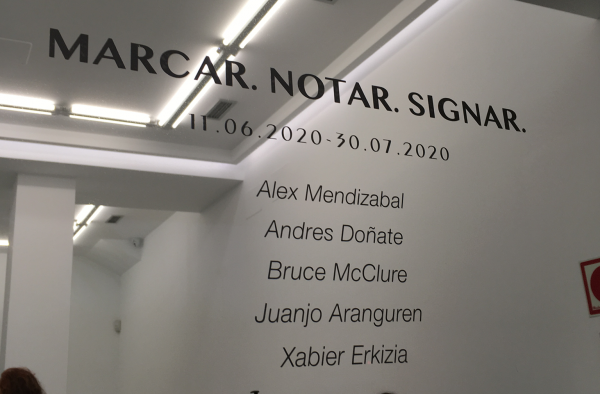 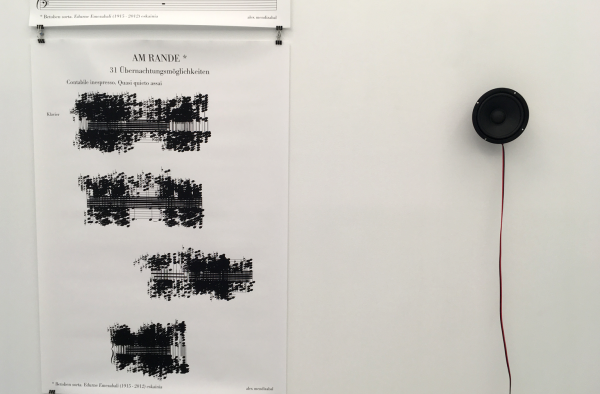 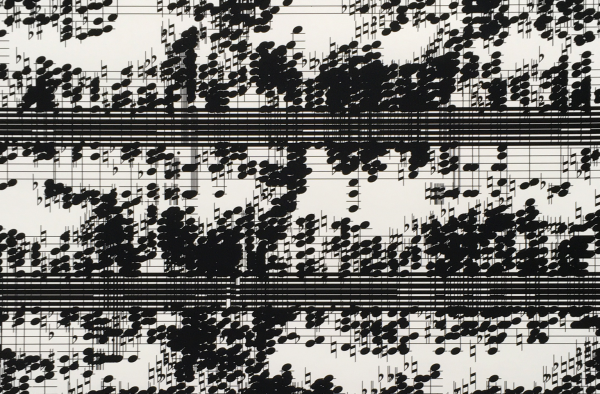 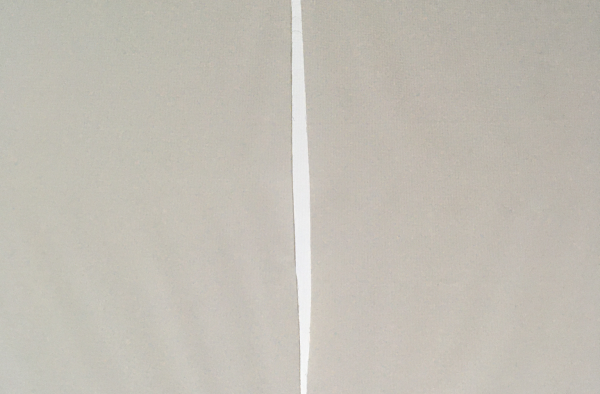 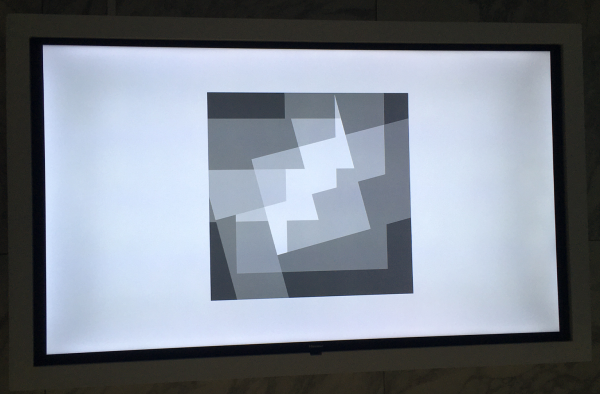 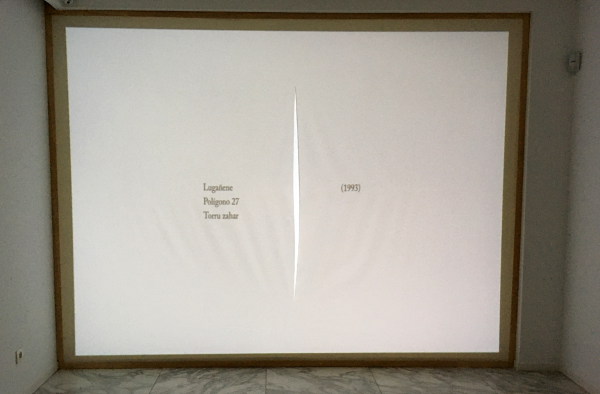 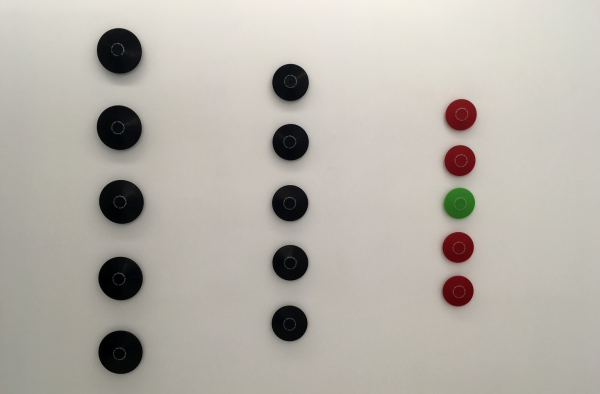 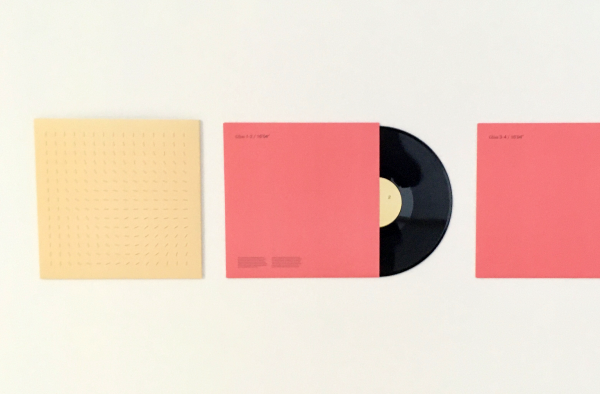 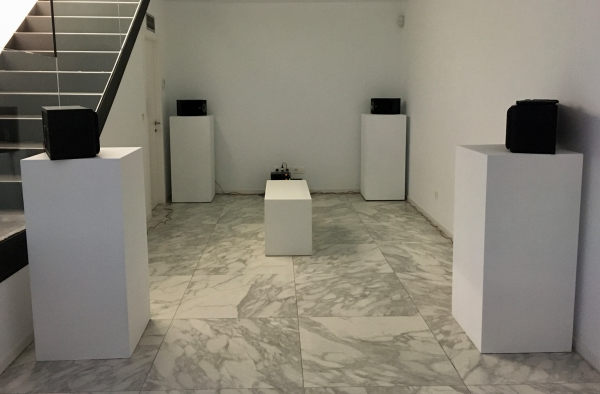 Leave a mark. A signal. Embroider initials on clothing. Make an incision. Mark a place.
Point out something so that it is known. Aim briefly. A sign. A signal.

Sound is matter. Sound as the only character. The sound as the plan of a place. Sound
as the record of someone, of a time, of a town. When Pauline Oliveros told us that one does
not hear a sound, but the place where it sounds, the moment when it sounds, who it sounds with…
It is understood that this material does not hang on a wall, does not wait for you to arrive to be named;
I need you, yes, but maybe not as one might think. These works have that particularity: they are
composed of sounds that rewrites when you listen to them. The writing of the sound, its letter, the note,
the mark on paper, the sign that hides a language for the one who writes or for the one who reads.
Maybe professional “listeners” could tell a story only of the sounds that have been left in the margin,
that binds the shores together, not repeatable sounds, sound film, loose papers, loose letters, signs.

This exhibition presents the research and results of the ARR EDIZIOAK project (composed of
Audiolab + ELSA Records), and tends to be a side note of the exhibitions dedicated to sound,
bringing together a series of works that reflect on sound as a medium. This exhibition includes
works by Andres Doñate, Alex Mendizabal, Bruce McClure, Xabier Erkizia and Juanjo Aranguren
who are sound writers, deeply connected through their works and experiences. In their immediate
environment, we do not see the cohesion that time has given us over other groups, that have
been references for the artists on display, but we can assume that friendship can be a common thread.

Sound-Art is interdisciplinary by nature and it can materialize through an infinite number of applications
that go back and forth between music ( musique concrète, electroacoustic, electronic, noise, ambient,
etc.) and the a priori understood as conventional arts (sculpture, video art, cinema…).
Relating its story here and now is not relevant but it deserves to recall its relatively recent genealogy,
from John Cage and Fluxus through Christian Marclay and turntablism, Max Neuhaus and the sculpture
in public space, aforementioned Pauline Oliveros and the idea of Deep Listening, or Luca Ferrari and
the radio art, just to mention a few references that show us the creative plurality behind the label Sound-Art.

We, all the platforms that have had the sensibility to broadcast sounds like noise, but ordered, annotated,
signed by the language and register of the artists, which is after all a way of indicating a place and a space,
assume that there are as many writing possibilities as there are signs and people. This is just a beginning
that brings together the works of Andres Doñate, Alex Mendizabal, Bruce McClure, Xabier Erkizia
y Juanjo Aranguren.

You can find out more about which cookies we are using or switch them off in settings.

This website uses cookies so that we can provide you with the best user experience possible. Cookie information is stored in your browser and performs functions such as recognising you when you return to our website and helping our team to understand which sections of the website you find most interesting and useful.

Strictly Necessary Cookie should be enabled at all times so that we can save your preferences for cookie settings.

If you disable this cookie, we will not be able to save your preferences. This means that every time you visit this website you will need to enable or disable cookies again.